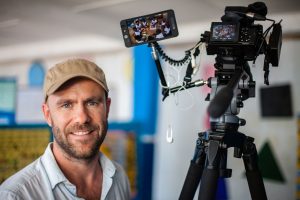 Chris Morgan is an experienced producer, director, and cinematographer. He has produced critically acclaimed documentaries for the BBC, PBS, and the Discovery Channel.

Since 2007 Chris has been producing films for the not-for-profit and NGO sectors, making international quality documentaries and corporate films. Clients include UNICEF, the United Kingdom’s Department for International Development, Sesame Street and Actionaid.

Recent projects include; a follow up to the award winning ‘Malaria-Fever Road’, a 5 part series entitled “Better Schools, Better Nigeria” about the challenges facing education in 5 Nigerian states and the reform efforts, and “Class of 2015” which is a longitudinal series tracking a group of school girls in northern Nigeria who should graduate in 2015.